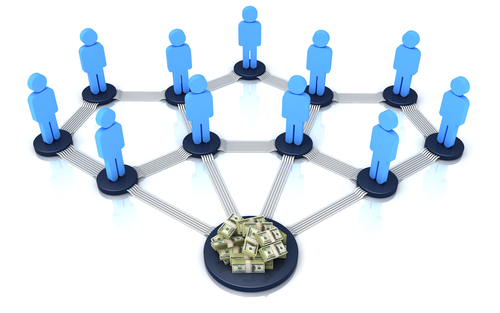 Multi-level marketing, sometimes known as network or referral marketing, is a potentially great way to run your own business with many substantial benefits. The idea is that you sign up for a distributorship with a network marketing company. Then you have the right to buy their products as a wholesaler and the right to sell them on without having to fund the cost. Therefore, you can consume and you can sell and receive the commissions. You can sell on two bases: retail, which is straightforward, or you can introduce somebody to the business so that they become a distributor. Bear in mind that, as there are no retail outlets and many of the costs associated with a traditional business, the distributors share the higher profit margins.
As you introduce more people and the people you bring in do the same, over time you should have a self-developing network. Say, for example, you introduce three people. Then those people introduce three people each. Then those nine people introduce three people each. Then those 27 people introduce three people each. Then those 81 people introduce three people each. Your income is a percentage of the total sales coming from your group. This rate gets higher as your network grows bigger. Therefore you can grow your network only by helping those in your network to grow theirs. Those who introduced you have a responsibility and an interest in supporting you in every way. As everyone’s income is determined by what they initiated everyone joins on the same level.
Some people who don’t understand it accuse it of being pyramid selling, which is something quite different. When you join a network marketing company, whether there is one person above you in the network or a thousand has no bearing on what you earn. In pyramid selling the more people above you the less the cut you take. Good organizations don’t commit you to a minimum purchase level and have regular training support from leaders. The advantages are that you need no real capital to start off and you can start while still in full-time work. You are operating a proven system that works. When you have a network you have a passive income, even if you take a holiday. The success of network marketing is staggering and has created a large number of self-employed millionaires.
Often people work as a couple, sharing the duties where they are best suited. It really is a system where you get out in direct proportion to what you put in, and couples can push, encourage and support each other. It does not happen over night; it is certainly not for someone looking to ‘get rich quick’. Initially, like any entrepreneurial opportunity, it means investing long hours upfront for financial freedom in the future. The rewards do not come short term, like in an employee opportunity.
Those who do not stay the distance and drop out tend to bad mouth the company. Understandably who is going to say it was them rather than the system that failed? You have to be prepared to take rejection as most people to whom you offer the business opportunity will not join, or worse join half heartedly then drop out when they realize it is a long haul. People sometimes get over keen on persuading others to join their network, which becomes irritating. Most successful people in this category who I have met clearly have high standards of honesty, integrity and leadership. There is no disputing, though, the thousands of people who have become millionaires through network marketing. In the USA, which produces a lot of statistics, each year’s new crop of millionaires include more than one in five who achieved it through network marketing. It is worth considering as it involves only a token investment and can be started part time from home.
As someone who has been employed in sales, I know that companies for which I worked 20 years ago are still milking clients who I brought to them. In network marketing you earn permanently on anything that you develop.
To succeed at it you have to be more focused on helping other people succeed, to succeed yourself. It is not about creativity, it is about duplicating a proven system. If you want to be independent and become financially free but do not have a creative idea or capital to invest, it is certainly worth looking at. Apart from your time there is also no risk of capital loss. There are many companies to choose from and their names appear in many business listings. As most people join on a personal introduction (they prefer to give their advertising budget to distributors), one can wait a long time before someone prospects you. Try surfing the net and pick a product/service that interests you, that you believe in and that you therefore wish to promote.
Anthony Whitfield has written this article on behalf of William Lauder Chairman of the Board and Executive Chairman, The Estée Lauder Companies

The Stamps And Inking Craze