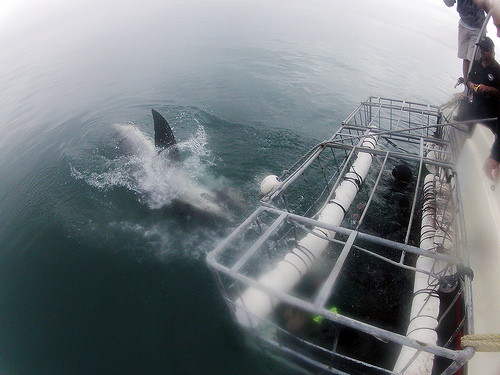 According to NationalGeographic.com, great white sharks are the largest predatory fish in the ocean – averaging 4.6 meters in length and 2,268 kilograms in weight.
They are the assassins of the sea, equipped with a powerful sense of smell that can detect a few drops of blood from 5 kilometers away, as well a sixth sense that enables then to zone in on the electromagnetic fields generated by living organisms.
They are built to hunt down and destroy, and once they have the prey in their sights, it’s not just the 300 razor sharp teeth that make them so deadly. Their torpedo-shaped bodies and powerful tails enable them to conduct devastating ramming attacks at 24 kilometers per hour. They can even gather enough momentum to launch themselves out of the water, seizing the hapless prey in their jaws and remaining suspended in the air for a few moments before crashing back down into the ocean.
Such maneuvers surely dispel any beliefs that the great white’s formidable size limits its mobility. Especially when you consider that their favored prey includes the famously agile seal, which, for all its slippery acrobatics, still struggles to elude the jaws of its attacker.
Air-bound sharks certainly make for an impressive sight, though distinctly unimpressive for the poor seal caught between the shark and the sky. The ocean is indeed a cruel and ruthless place, especially for anyone who isn’t a great white.

Meet it on its home ground

The creature is fearsome, but also awe-inspiring to behold, and shark cage diving presents the opportunity to do exactly that. It allows you to witness them in their natural habitat, bringing you close enough to even make eye contact, if you dare.
The diving cage is suspended just below the surface of the water, allowing for easy access to and from the boat. Some cage diving operations have a snorkel attached to the cage, while others provide passengers with scuba diving gear.
Some conservationists approve of shark cage diving, not only because of the opportunity it provides to observe and study shark behavior, but also because it promotes greater understanding and appreciation of an endangered species.

Whitesharkcagediving.com provides some information on the popular cage shark diving hotspots, such as the Neptune islands near Australia, and Gansbaai (Bay of Geese) in the Western Cape of South Africa.
With the highest number of shark cage diving operators, and shark spotting trips available all year around, it’s clear why Gansbaai is considered the shark cage diving capital of the world. The small fishing town attracts some of the highest numbers of tourists to South Africa for a single activity.
The nearby Dyer Island is a breeding ground for African Penguins, while Geyser Island is a breeding ground for Cape Fur Seals. That makes the space in between the two islands a feasting ground for great white sharks, hence its nickname “Shark Alley”. Every year thousands of seals and penguins are drawn to these islands, where they spend their time fishing, frolicking and trading war stories about their near-death encounters with great whites.
The thriving marine ecosystem means it’s not just sharks that bring in the tourists. In fact, Gansbaai is only half an hour’s drive from Hermanus – a popular whale-watching location.

The diving cages are made from 12mm galvanized steel and are built to resist both the power of the shark’s bite and the impact of its ramming attacks.
Cages have rarely been the target of aggressive behavior by the sharks though, as they are more interested in the frozen fish or fake seals used to draw them to the boat. On the few occasions where a great white has had its attention drawn to the cage, there have been no injuries.
That said, shark cage divers should still remember that they are observing a powerful creature in its natural habitat, and they should be respectful of that fact. Attempting to engage the shark in any way, such as by sticking your hand out the cage, is ill-advised, unless you’ve decided that you really don’t need the hand after all.