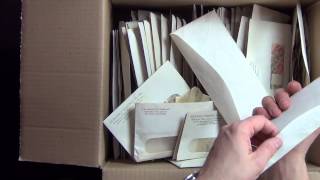 Collecting postage stamps is still a popular hobby (or passion) for many people around the world. Commemorative and special edition stamps are still created on regular occasions—a set was released to celebrate the 2012 London Olympics, while Doctor Who and other pop culture icons have recently been honoured with their own sets—and continue to be a huge draw for collectors. However, while some stamps may no longer attract the huge prices they may once have amongst philatelists, there are rare stamps which accrue greater and greater value as time goes on.

The world’s rarest and most valuable stamp is the Treskilling (or “three schilling”) Yellow from 1855 (printed in Sweden), which became famous for its printing error: originally, the set of 3-skilling stamps were printed in green, yet one was accidentally printed in yellow—the colour intended for the 8-skilling stamps. This is the only existing stamp of its kind today, and retains a high value despite reports that it has undergone repairs for slight tears. This was sold to an anonymous collector for $2.3m in 1996, but the 2013 Scott World Stamp catalogue has valued the used Treskilling Yellow at $3m.

The Post Office Mauritius is another of the world’s most expensive antique stamps, dating back to 1847 when the Governor of Mauritius commissioned the colony’s first postal stamps. Two stamps were created by a local watchmaker from Port Louis: a one-penny stamp and a two-penny stamp. When preparing to print the stamps, the watchmaker engraved “Post Office” instead of “Post Paid”—an error which went undiscovered until more than 200 copies of the stamps had been sold. Experts believe fewer than 30 copies still exist, which are valued at $600,000 and above (depending on condition), yet a cover with two of these stamps fetched $3.8m in 1993.

The U.S. Franklin Z-Grill stamp is believed to be the rarest to originate in the States, with only two copies known to exist. Bearing a portrait of Benjamin Franklin, this also featured a Z-pattern of miniature squares embossed on the stamp, designed to aid absorption of the cancelling ink into the paper (this prevents the cancelling marks being washed out, stopping anyone from using the stamp again). As these Z-Grills were deemed impractical, they were never used again. As a result, these have become incredibly rare—one was sold for $930,000 in 1998.

Stamp auctions are commonplace amongst collectors, with sets and singles up for sale at all prices. A good action site will provide all the information both experienced and novice collectors need, with current guide prices, print-and-issue dates and the stamp’s condition. People collect stamps for various reasons: some prefer to own them for their historical and aesthetic value, whereas others are more interested in their monetary value. Whatever your motivations for collecting, the important thing is to keep them in the best condition you can—as the above illustrates, you never know how valuable they may one day become.

Amanda Evans is a keen hobbyist, collector and writer with a particular interest in stamp collecting. She frequently writes articles for websites specialising in rare stamps, including Sandafayre.

5 Tips For Benefitting From Networking For Your Business