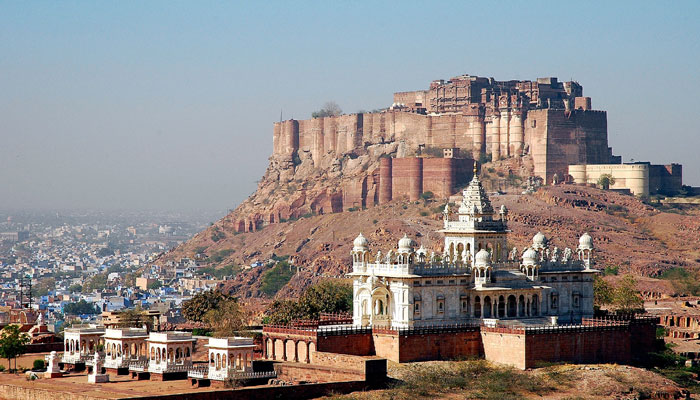 Located in the calm deserts and shape shifting sand dunes of Rajasthan, lies an ancient city surrounded by the stronghold of a majestic fort. The city of Jodhpur was named after its founder Rao Jodha who led the powerful dynasty of the Marwar Empire, one of the leading dynasties in the Rajputana region. The city was established in the 15th century and has enjoyed a fantastic, royal charm. The royalty gave way to architectural minds to work on some monolithic and fascinating monuments. If you’re living in the national capital, after enjoying the wonders of the city you can take a Jodhpur to Delhi cab to return. Let’s take a look at some of the historical monuments in the city of Jodhpur.

Mehrangarh Fort – Representing the rich cultural and historical heritage in the gigantic complex of the Mehrangarh Fort. The largest fort in the state of Rajasthan was built in the 15th century during the rule of the Marwar dynasty. The modern city of Jodhpur was then established around the royal fort. Legends has it that in its more then five and a half centuries of history, no other kingdom has ever tried to take over the fort, the reason being its massive size and other hidden edifices. The fort complex also houses several temples, palaces, gardens and more to look out. And in case you’re a movie buff, you might recognize Mehrangarh Fort, as the hideout where Bruce Wayne aka Batman was canned in the ‘Dark Knight Rises’.

Jaswant Thada – Constructed in 1899 during the rule of Maharaja Sardar Singh in the memory of his father Maharaja Jaswant Singh, this famous tomb is made out of intricately designed marble stones. The upper parts of the tombs have been polished to that extent, that when the sun rays falls on it, the whole thing illuminates. After its construction was completed, the Jaswant Thada has been the traditional burial ground to the royals and consist of two more tombs. Following pure Jodhpuri traditions, the tomb of Maharaja Jaswant Singh is adorned with portraits of the former Maharajas of Jodhpur. The memorial looks like a temple and you’ve to pass through rocky terrains to the reach the tomb as its located in the same hilltop as the Mehrangarh Fort. You also get a fantastic panoramic view of the Blue City, from the top of the tomb structure.

Umaid Bhawan Palace – Considered as the last majestic palace of India, the Umaid Bhawan Palace’s construction finished in the year 1944 and it became the residence of the royals of Jodhpur. After enjoying a royal treat for few decades, the families then decided to turn the palace into a hotel and it was taken by the Taj Group in 1972, although the palace still retains its status as the largest royal residences in the world. The palace consists of some 347 rooms and was constructed during the rule of the Maharaja Umaid Singh, with palace complex consisting of temples and lavish gardens to entice your senses. A lot of foreign tourists coming from the national capital visit the palace each year. In case you’re wondering how to reach Delhi, the city is well connected with other major cities in the world.

Food That You Should Definitely Try When You Visit Kolkata