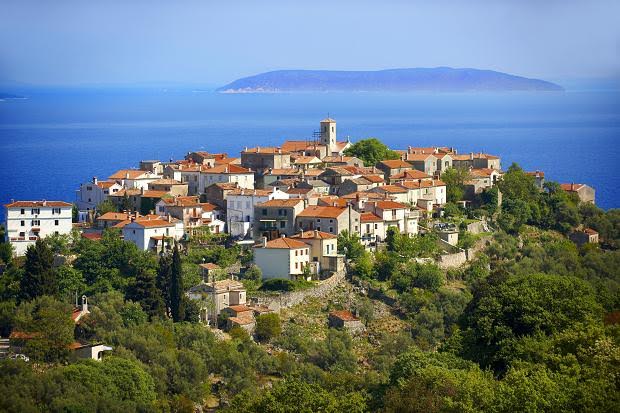 The area of Osor was inhabited since the prehistoric time, while in Roman and Byzantine times and the era of Croatian Kingdom in the medieval, it was an important strategic settlement, which was already a developed and fortified city. White the arrival of the Venetians, Osor began to decline, with Cres as the main settlement, while in the 20th century, tourist became the main ‘conquerors’ of the city.

The most noted sight of this town is the Cathedral of the Assumption of Mary from the 15th century (1463-1498), with bishop’s palace from the same time next to it, along with separated bell-tower from the 16th century. On the same square where the cathedral is located, there is an ‘Osor’s garden sculpture’, which present a dozens of monuments, sculptures and busts of famous people which a true gem of this beautiful town. The relief of Venetian lion and the gothic Church of Saint Gaudentius from the 14th century, who is a patron of Osor, are amongst other noted sights of this town. Not far from the city walls, ruins of a Benedictine monastery and the Church of Saint Peter are located, and old Christina Basilica of Saint Mary is on the way to the old eastern channel. There is one more monastery, of Glagolitic Franciscans of the Third Order, with the Church of Saint Mary of Angels next to it. In the vicinity of the Franciscan Monastery, camp ‘Biljar’ is located, with rocky beach and a few gravel coves next to it. The size of the camp is around three hectares, and it has a capacity of around 750 people. Second, somewhat smaller beach is near the city walls, on the other side of the camp ‘Preko mosta’.

In the centre of the place you can rent apartments and rooms. The food specialities of the island, such as fish, Cres lamb and chees, can be found in one of the several taverns, while the fans of pizza and coffee will be delighted to know that there are several coffer places and one pizza place on the island. The Cathedral of Osor is surrounded with gorgeous stone streets and squares. It represents an excellent scenery for hosting famous Osor Musical Evenings. They were first held in 1976. The number of famous compositors such as Boris Papandopulo, Jakov Gotovac, Krsto Odak, Stjepan Sulek, Stanko Horvat, Luka Sorkocevic and many other, witness about the importance of this musical festivity. It is less known that between 1080 and 1082 in the former Monastery of Saint Nicholas in Osor, famous ‘Osor Evangeliary’ was written, which is the first Croatian manuscript with ‘neuma’ (notations in the superscript) in the church music. In the evangelier, there is a pray for the pope, Byzantine Emperor and the ruler of the area (regis nostri) King Zvonimir. This important artefact is kept in the Vatican Museum. Since Osor is on the main island road D100, which connects the cities of Cres and Mali Losinj, it can be simply reached by car.

There are two main parking spaces. One of them is located inside the city walls, next to the stationery bridge, while the other is across the Basilica of Saint Mary. There is an info house for all visitors next to the latter parking space. The bridge is working from 9 AM to 17 OM, so the ships can pass through the Kavuada Channel. Since Osor is located on Cres, which is an island, it can be reached by car from two sides, that is two ferry lines: Valbiska – Merag and Brestova – Porozina. Porozina is a little farther from the city of Cres, unlike Merag, which is around 15 kilometres from the centre.

Related Topics:Cres Island
Up Next

Touring The Majestic Palaces and Monuments Of Jodhpur