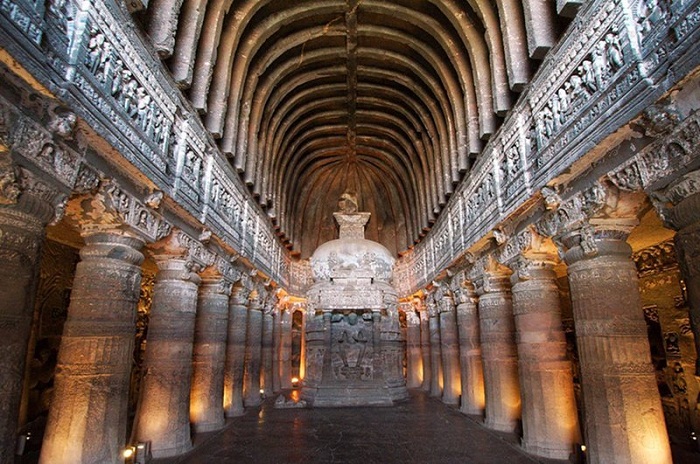 The Ajanta and Ellora groups of caves are the oldest mysterious historical monasteries that date back to second century BC. The caves are located more than 100 km from the city of Aurangabad and were re-discovered in early eighteenth century AD. Most of the 30 caves are monasteries and 5 of them are Buddhist shrine & Jain Stupas called Chaitya Grihas. This greatest archaeological discovery in the world are ancient sculpted cut rock art of the ancient times.

The Stupas and rock carvings depict various scenes from the life of the King Gautham Buddha. Some of them also show the various re-incarnations of Gautham Buddha. There is mysticism in these rock sculptures of several centuries of ancient India in the carvings and streams flowing under the caves. Visitors from far and near throng to this ancient historical discovery every year to watch and experience the ambiance of up yon wide and lonely Ajanta Caves. 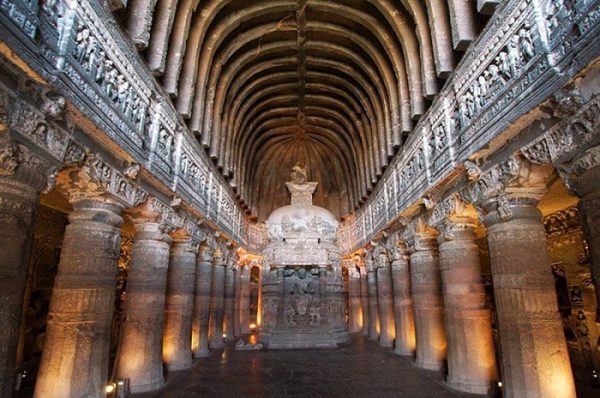 There is no other better way to experience the unmatched mystique and beauty of the Ajanta Caves than the Deccan Odyssey train. Similar to a luxury cruise, the Deccan Odyssey takes care of all the requirements of guests onboard. From meals, to health spas, to excursion tours – all are included. The guests need to come to the embarking point for the formalities. This may be the first time you are entering India and require help with the confusing routes and tour packages. The best way is to book Deccan odyssey ticket as the luxury train management would plan and organize everything including the itinerary & route on this sojourn.

The Deccan Odyssey journey – Maharashtra Splendor tours mystical and exotic local culture of Maharashtra. The 8d/ 7N journey covers Mumbai, Nashik Ajanta & Ellora Caves, Goa, Kolhapur, Sindhudurg and comes back to Mumbai. The luxury train chugs along the ancient places like Kolhapur, the western coastline of the Indian Peninsula touching the Konkan party beaches, and the Deccan region. Take in the breath of ancient rock sculptures as scenes of Buddha showcase on the rock carvings. The centuries old caves are timeless architectural marvels withstanding the test of time.

On the Day -4 of the Maharashtra Splendor tour the Deccan Odyssey stops at Jalgaon Railway Station so the guests de-board for a drive to Ajanta caves. These 30 massive rock caves with Buddhist & Jain Stupas, Shrines and rock sculptures will take you back in time. This pictorial depiction in cut – rock displays the linkage in the Hindu and Buddhism faiths of ancient India. After guests take the tiring but awe – inspiring tour through the centuries old caves they are back to the luxury on Deccan Odyssey. The train proceeds the onward journey to visit the ancient sites of Kolhapur while guests are served a sumptuous lunch & dinner onboard.

Guests can relax in luxury onboard by watching a movie, playing carom or rejuvenate the mind, body & soul at the onboard health spa. Delectable Oriental, Continental & Indian multi-cuisine is served at the two on-board Dining Cars – Peshwa – I & Peshwa – II. The seating is in two & four and both sides there is a window to look out. There is a well stocked bar called Mumbai Hi with local & international spirits to lift your spirits with a choice chilled drink. There is also a sitting lounge or guest saloon to play a board game or crossword puzzles, have a hearty chat, or watch a movie. Moreover, rejuvenate yourself in an Ayurveda Health Spa onboard at the Royal Spa in the fitness suite where you can also find a fitness place and equipment for working out on the weeklong journey.

Each of the 12 guest carriage aesthetics showcase opulence & luxury. These are separated into 2 Presidential Suites housing 4 Cabins & 10 Suites housing 40 cabins. The guest cabins are fully air-conditioned and have sufficient space to move around freely. They are equipped with a neat & clean washroom, a safe lock to keep valuables safe, calling facility & round – the – clock personal attendant.

These carriages have a soft mattress & pillow and hygienic bed & bath linen. Moreover, the interiors are done with painting and wall decor showcasing an ambiance of the Maharashtra Splendor.

Don’t waste time to be a part of this great tour to explore the architectural discovery of the 1800s – depicted in the romantic historical rock carved scenes of Gautham Buddha at the Ajanta Caves with the Deccan Odyssey.

Related Topics:Reasons to Visit Ajanta Cave
Up Next

Tips For A Family Road Trip Across The US

Reasons To Visit Agra Fort With Palace On Wheels