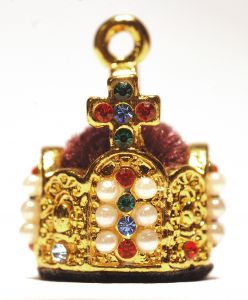 When a king or Queen passes down the throne, they hand over more than just power, they pass on enough bedazzled headwear to supply a decade’s worth of quinceañeras.
Unfortunately for this article, but thankfully for newly-free people everywhere, Monarchs are a dying breed.

Ever since that silly Revolutionary War people want the right to vote.
Whatever, let them eat cake.
Even if you didn’t stay up all night squealing “oh mah gawd oh mah gawd”
to watch the royal wedding, you can still appreciate a piece of tradition.
Plus, deep down, everyone likes shiny things. Besides,
who wouldn’t want a crown or tiara?
Even if you’re more in the market for a crown from Burger King,
you can still drool, just be sure to wipe it off the keyboard.

While I find it surprising that a country in Scandinavia,
an area known for its progressivism and social freedom, still has a monarchy,
it’s no shock that they have a beautiful and storied tiara to adorn the head women of the ruling class.
This particular tiara was originally a gift from Napoleon Bonaparte to Empress Josephine of France.
Empress Josephine passed the jewels on to her granddaughter, Josephine of Leuchtenberg.
Josephine of Leuchtenberg, or J of L, as I like to call her married King Oscar I of Sweden in 1823 and moved to Stockholm, taking this priceless tiara with her.
The royal family has since made good use of it, wearing it to weddings, dinners, and multiple Nobel Prize galas.
But back to the tiara: Encrusted with hundred of pearls, this golden masterpiece includes seven vignettes of mythological figures including, of course, Cupid.

Any discussion of royal jewels starts and ends with England. Although the sun may have finally set on the British Empire, the spoils of owning nearly half the world remain.
As far as royal tiaras go, this one is fairly recent. In 1947, the people of Burma sent Queen Elizabeth a set of rubies as a wedding present.
This was particularly flattering given that in Burmese culture, rubies protect their owner from evil spirits and poor health.
But what good are rubies if you can only look at them? Elizabeth thought, why not wear them?
In 1973 the queen commissioned the venerable Garrard & Co. Jewelers of London to create a new tiara utilizing the Burmese rubies.
The result was a wreath of silver roses colored with the magical rubies. As if that weren’t lavish enough, they lined the whole thing with hundred of diamonds.

Garrard & Co. are no strangers to the royal jewelry business.
Founded in 1722, the company has worked for the likes of the Prince of Wales, nearly every member of the British Royal Family, and the Imperial Crown of India. Garrard & Co.
are also famous for handling the cutting of some of the world’s most famous diamonds.
So if you have a couple million to blow and a taste for bling, you know where to go.

Practicality isn’t exactly the first thing that comes to mind when I think of tiaras, and the Spanish aren’t exactly known for their utilitarianism.
Maybe it has to do with their economic crisis, but the Spanish are certainly getting some mileage out of their jewels.
This particular tiara can be converted into a necklace, and the flowers can even be removed and worn as broaches.
This platinum and diamond creation consists of five flowers designed by the House of Mellerio in 1962.
Originally commissioned by a Spanish military officer as a gift from the Spanish people to princess Sofia,
it is a wonder this piece wasn’t melted down and sold as part of Spain’s austerity reforms following the global economic crisis.

In 1913, Queen Mary, wife of George V commissioned Garrard’s to create this unique piece.
Featuring drop-shaped pearls dangling from a lover’s bow in diamond-encrusted arches, this is some hard-to-miss headgear.
Mary passed this tiara down to her granddaughter, Queen Elizabeth, who in turn gave it to none other than Princess Diana as a wedding present in 1981.
After her infamous divorce from Prince Charles in 1996, Diana returned the tiara to the queen.
There was much debate, and a even a significant amount of betting on what tiara Kate Middleton would wear down the aisle for her wedding.
The Cambridge lover’s knot was the far-and-away favorite with 5:2 odds.
Unfortunately for a few hard-core gambling addicts out there, Middleton opted for a relatively understated piece from Cartier rather than this full-blown swing set of pearls.

License: Royalty Free or iStock
source: http://www.sxc.hu/photo/1148658
The author of this article is Damien S. Wilhelmi. If you enjoyed this piece, you can follow me on Twitter @JakabokBotch.
Royalty may have some great jewelry for themselves, but if you’re looking for the best Jewelry Stores in Boulder CO, be sure to check out Cronin Jewelers.

Necklace – Jewelry For The Queens