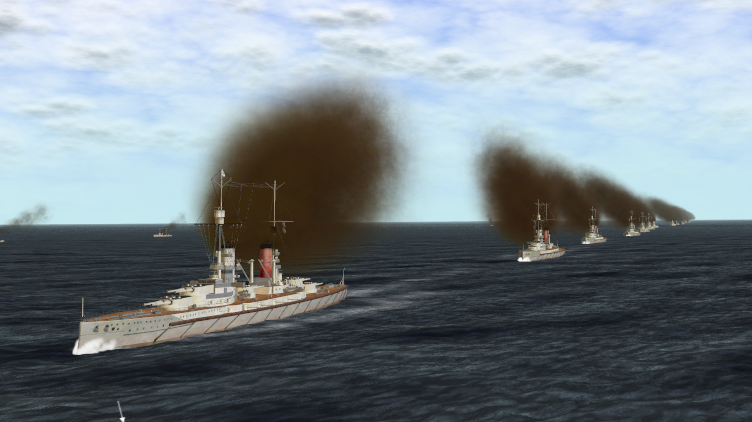 Jutland is a small peninsula located off the shore of Denmark and it is a historic site where the greatest battle between modern battleships occurred. Because battleships are now practically extinct, replaced by aircraft carriers and guided missile warships, we may never witness a repeat of this situation in the future. Although there were other bigger naval battles in the history, many of them typically consisted of wooden warships and aircraft carriers. Jutland was the only place where huge steel warships with guns battled one another in a most gigantic clash.

Unlike battles in the later years, it is all about guns and steel; instead of aircrafts and missiles. The battle took place between the Royal Navy and the German Fleet from 31 May to 1 June 1916. At the time, the World War I has occurred for two years and Germany struggled from the naval blockade that prevented commerce ships from travelling in and out of the country. A war conference was held in Germany and it was decided that the only way to break the blockade was by inflicting crippling damage to the Royal Navy and other Allied navies.

German fleet was smaller with only 16 battleships and the Royal Navy had 28 battleships. For battlecruisers, the German fleet could muster only 5, while the Royal Navy had 9. Overall, the British fleet had a numerical superiority, nearly 2:1. All in all, there were 150 ships involved in the battle, including smaller cruisers and destroyers. It is quite for German that bad weather prevented the use of Zeppelin airships for reconnaissance and U-boat submarines wasn’t available to intercept the Royal Navy. Although things didn’t go according to plan, Admiral Scheer was confident about the outcome of the battle.

The battle is consisted of two phases and it began when Admiral chased away a part of the British fleet. The second phase was when a fleet under Admiral Scheer clashed with the main Royal Navy column. The battle lasted for the whole night and it was no doubt the largest battleship clashed that ever happened in the history. German dreadnoughts have slightly smaller guns but thicker armor, while British ships had less armor and heavier guns. This proved to have a significant effect in the battle with some German battleships nearly hit 30 times, but were still in no danger of sinking.

The British warships had flaw in design and this resulted in three battleships lost in quick succession. Some of the shell hit the armory causing catastrophic explosions and there were a few survivors when British battleships literally disintegrated. In real terms, British had heavier losses, but it wasn’t enough for Germany to break the blockade as planned. Although British suffered more losses, it still strategically won the battle. The Battle of Jutland convinced Germany that they are unable to defeat the Royal Navy and the Germany’s High Seas Fleet remained largely dormant for the remainder of the war.

Why We Should See Our Mind As An Iceberg?