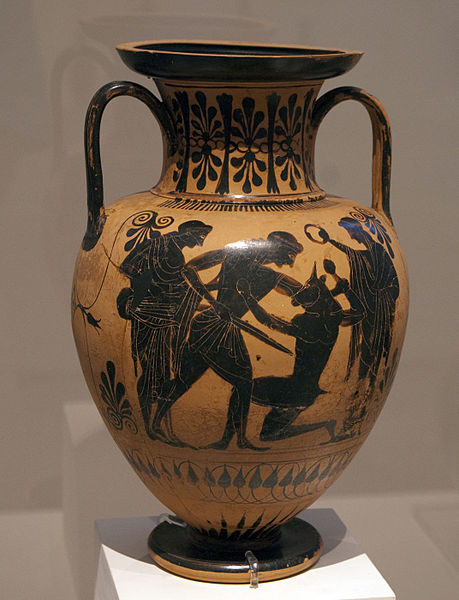 Mythology has provided us with an abundance of powerful stories, many of which continue to be retold in one form or another. But, to people of the time myths were more than stories. They were an expression of national pride, a reflection of their cultural values, and, in some cases, an effective propaganda tool.
One such example can be seen in the story of Theseus and the Minotaur; a famous Greek myth in which Theseus, the prince of Athens, seeks to slay the beast that terrorizes his people.

Theseus and the Minotaur

Like many of the Greek heroes, Theseus is raised by his mother in an idyllic setting, unaware of his true heritage.
When he comes of age, his mother tells him of a large rock near the village, under which his father has left him a gift, should he prove himself strong enough to claim it. After a few failed attempts, he eventually succeeds in moving the rock, and discovers a finely crafted sword and a pair of sandals underneath. His mother then tells him that his father is none other than Aegeus, the king of Athens.
Theseus resolves to travel to Athens, and upon arrival finds the city in a state of despair. Minos, the king of Crete, subjugated the proud Athenians long ago, and since then exacted a bloody tribute from them. Every nine years Athens must send seven youths and seven maidens to his court at Knossos, where they are sacrificed to the monstrous beast imprisoned in the labyrinth beneath his palace.
King Aegeus, upon discovering Theseus’ identity, welcomes him with open arms and acknowledges him as his heir. But, the prince of Athens does not stay for long. Having heard of the tribute, he offers himself as one of the sacrifices, intending to slay the Minotaur and free his people from this curse.
Upon arrival at Crete, Theseus wins the love of the king’s daughter Ariadne, and seeks the advice of Daedelus, the genius who designed the labyrinth. With their aid he is able to slay the Minotaur and escape the twisted maze.

Hercules and Theseus were both famous heroes of Greek mythology. But while Hercules had no strong link to any particular region of Greece, Theseus was very much the Athenian hero.
The prince of Athens who protects of his people, and later a king who leads the city-state into battle, his mythical deeds include uniting the twelve factions of Attica and introducing democracy, making him a symbol of Athenian unity, culture, and pride.
Furthermore, Theseus possesses many of the qualities that ancient Athenians chose to see in themselves. This is especially evident when comparisons are drawn between him and Hercules. While they both possess great courage and strength, Theseus also displays cunning, intellect, and a strong sense of justice.
In his early adventures, he takes it upon himself to rid the road to Athens of brigands, dispatching each of the six notorious villains in the exact manner in which they did their victims. These encounters are referred to as the “Labors of Theseus”, mirroring the twelve labors of Hercules.
In the myth, Theseus looks up to Hercules and seeks to emulate his deeds, and in some versions they even assist each other in various endeavors. But, ultimately, Theseus is portrayed as a more sophisticated version of Hercules, which may reflect the way Athenians perceived themselves in relation to other Greeks.
After all, it was the ghost of Theseus and not Hercules that Athenian soldiers claimed to have sighted at the battle of Marathon, granting them the strength to drive back the Persians and secure the first of many victories that would see Greece arise as the new Mediterranean superpower.

License: Creative Commons
image source
Matthew Flax appreciates the lessons that are inherent in well-crafted stories, and what stories are better crafted or more inspirational than ancient Greek myths?

For Those Who Are Serious About Their Postage Stamps