A TV advert from St John Ambulance has hit the headlines recently for shocking people into learning basic first aid skills. A boy falls from a tree with a sickening thud whilst his father is distracted by a mobile phone. A woman trained in emergency first aid rushes outside, but it turns out that she is elsewhere and simply collecting her washing in from the rain. The father, meanwhile, is left screaming for help by his unconscious son as he does not know how to help him survive.

The first aid charity says that more than half of parents (55%) lack the skills necessary to save their child in the event of a life-threatening accident. So Sue Killen, chief executive of St John Ambulance, is pleased by the advert’s response. She said:

“We know some people were a little shocked by the advert but as one Twitter user said: ‘I’d rather be scared by an ad than scared because I couldn’t save someone’. We’re really pleased with the way people have responded and that tens of thousands more people can be the difference between life and death.”

Thousands of new people have started following the charity on social media platforms such as Facebook and Twitter, and there has been a 62% rise in bookings for first aid courses. Ideally, everybody would have to attend a first aid at work course which would equip people with the basic skills needed to deal with such a situation. Emma Sheppard, acting director of brand, communications and fundraising at St John Ambulance, explains:

“We don’t want to be shocking for the sake of it but we’ve found that people have apathy towards first aid and a powerful message is proven to get people to take action. Many people think someone who knows what to do is going to be there. Unfortunately, that’s not always going to be the case and that’s the point we try and get across in the advert.” 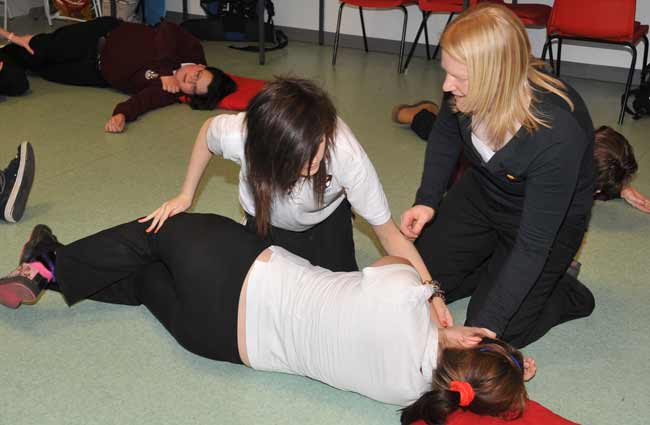 First aid at work courses cover skills which can be applied to everyday life. One never knows when an accident may happen, so it is important that as many people as possible are qualified in basic first aid. The thought of not being able to help whilst a loved one is dying in front of you is horrific. First aid at work training is accessible to a vast majority of the adult working population, as Sue Killen points out; there is no excuse for not knowing how to save somebody’s life. She said:

“It’s devastating to find that over half of parents wouldn’t have the first aid confidence to save their own child’s life. And it’s not just parents. Over 40% of people admit that it would take something as severe as the death of a loved one to make them learn first aid.”

Do not be one of the percentages of people who wouldn’t know what to do if confronted with an emergency. Sign up to a training course and get skilled.

About the Author – Sarah Makinson is a regular contributor to a variety of blogs, including the one at St John Ambulance.

5 Reasons To Take A Year Out Working Abroad