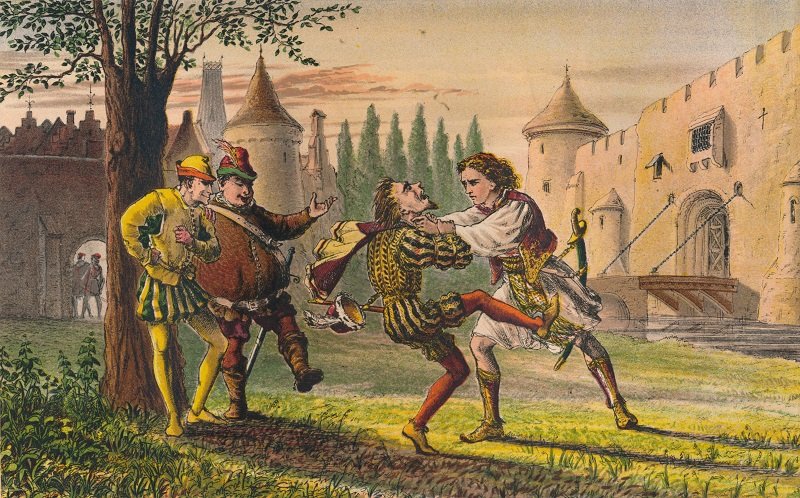 In Shakespeare’s Hamlet, Shakespeare presents to us Hamlet; the protagonist of the play who becomes a victim to the power of the deceit that surrounds him. By Hamlet changing from an admiring tone of his father to his abhorrent feelings radiating towards Claudius- the new king and the murderer of Hamlets father and to the detesting of his mother Gertrude, the reader can see the debilitating effect that deceit has upon Hamlet. Hamlet shows that Hamlet’s tragic is his susceptibility to deceit because of his wanting for revenge and his anger towards his mother and King Claudius.

The deceit that Hamlet’s mother and Claudius exact upon Hamlets are shown by Hamlet’s extreme love and admiration for his father coupled together with his disapproval of his mother’s hasty marriage to Claudius . Hamlet feels very deceived by Claudius after the ghost tells Hamlet that Claudius killed Hamlets father. In response to the ghost, Hamlet is infuriated and intends to seek revenge for his father. Hamlet reflects on how well his father had treated Gertrude showing that it is not only the king who Hamlet lost but also a loving caring father. Hamlet then realizes that his mother is feigning sorrow towards her late husband and Hamlet loses love for her and feels as though she is just as guilty as Claudius is. Hamlet’s anger towards Claudius is so strong that it leaves him open to the plan that Claudius and Laertes have created in hopes of killing Hamlet. Deceit at this instance is oblivious to the Hamlet and causes him to be wounded by the poisoned sword of Laertes and Hamlets slow death. 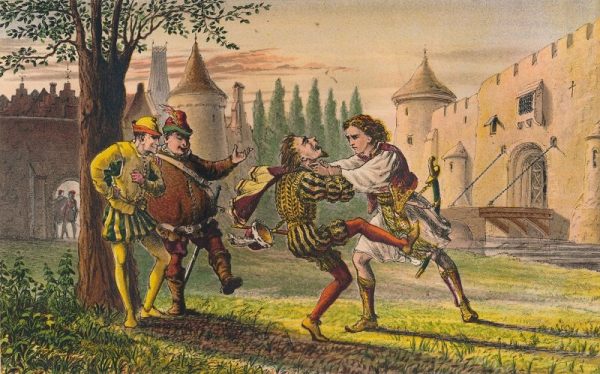 In his search of revenge, Hamlets wanting to get revenge causes the death of many characters along the way, rather than take the one life he was supposed to take, Hamlets causes numerous deaths because of the first deceit from the king. Although Hamlet a victim of deceit, he is not blameless when the reader takes into consideration that Hamlet kills Polonius in cold blood, having mistaken him for Claudius. but just as the ghost who wants revenge because he was deceived by his brother Claudius and therefore is only focused on one thing which is payback, so is Hamlet in only one mindset not able to fully think his actions through.

There are those that might say that it was not the deceit that surrounds Hamlet that causes his spiral into ultimate tragedy, but rather his very poor mental health. Hamlet does after all speak to the ghost of his father in front of his mother although she cannot she the ghost Hamlet claims speaks to him. Clearly Hamlet must have delusions because of the high stress levels and that caused him to become mad and rogue. However such an argument overlooks the fact that the guards are the first to see the ghost and on more than one occasion and Hamlet’s reasoning to not allow Claudius a free passage to heaven by killing Claudius while he prays; this Hamlets only acknowledgement of a deceit that would befall him if he were to have killed Claudius.

And so it is the power of deceit that makes Hamlet set on seeking revenge. The ploy of Hamlet to punish those who have deceived his father succeeds and fails in tragedy as Hamlet is responsible for the deaths of not only the ones closet to him, but especially his own demise. Shakespeare succeeds in showing that it is deceits nature to cause characters to seek revenge only to cause them to become overwhelmed by the endeavor and become the victims of their own aspirations of vindication. Hamlet falls into disfavor with everyone in the kingdom and has nothing but the memory of his father to keep him semi aloof on his seemingly sedulous path where he loses his emotions towards anyone but himself.

How To Make A Resume For First Job