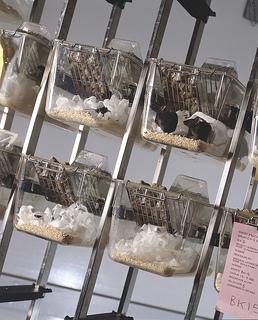 Organizations like PETA and other animal rights group are working towards stopping animal research,
excluding that which studies natural behaviors of the animal in a noninvasive way.

Some say that testing on animals is one of the only ways to save human lives and
prevent suffering, while others think it is unnecessary.
There are at least 14 million animals tested on every year.
Some even speculate that number to be as high as 70 million.
This number only covers the animals that scientists are required to report,
which doesn’t include birds, reptiles, or rodents.
PETA estimates that the number of mice and rats killed every year reaches closer to 100 million,
way above the predicted amount for animals that require research documentation.
What exactly is it that makes mice a more viable candidate than other animals?

Mice have many of the qualities that are useful when it comes to animal research.
Here are some of the top reasons mice are used in animal experimentation:

Researches have found that these traits make the mouse the perfect candidate for their experiments.
It also probably helps that there is no requirement to document how many mice are being experimented on in the United States,
although there are currently steps to change that legislation, as it did in the UK.

One of the biggest reasons to experiment on animals is to find the best cures and solution to human disease and problems.
The mouse is known, in the science world, to be one of the closest related animals to humans as far as inherited diseases go.
We share 99% of our genetic makeup with them.
Genetically modified mice can be purchased by researches, venturing even farther closer to human DNA.
These mice are more expensive, and can cost researchers a couple hundred dollars per mouse;
however, they can teach scientists more about our own genetic background, and why certain genetic disorders are present in certain people.
Mice that are chimerically produced are born through researchers injecting embryonic stem cells into at least 150 blastocysts.
Each round of this procedure usually results in 30 to 50 live mice.
The biological differences from the mice produced can also be a key insight into our own physical and mental structure.
There are many advantages to experimenting with animals such as mice; however, there are also obvious disadvantages.
Laws that require rodents, birds, and reptiles to be documented during experimentation should be brought to the United States,as they have in other countries.
Mice have been a great help to discovering key genetic mutations, but their experiments should be documented as much as any other animal.

License: Creative Commons
image source
By +Cassie Costner
Cassie writes on the advantages and disadvantages of animal testing.
Besides this, she writes on the pros and cons of animals in the home, how to identify an infestation, and helps homeowners find the cheapest pest control Denver, Colorado has to offer.