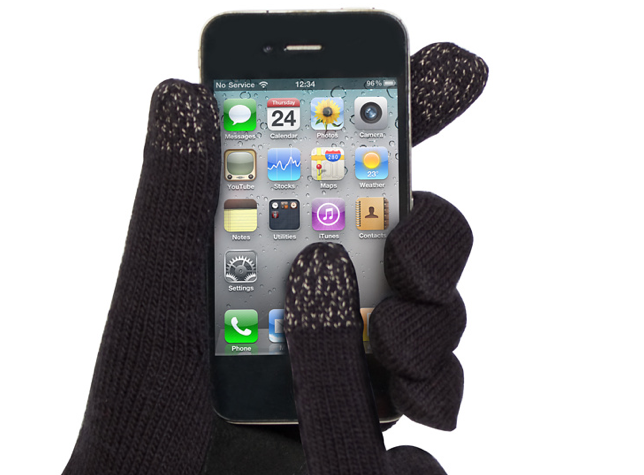 In fall, winter and in early spring, all smartphone owners are faced with a common problem, which is quite serious: how to use a gadget outdoors. In order to make calls, send texts, etc. from our Nokia cell phones or Samsung phones, we have to constantly take off our gloves, however it is not very comfortable when it is plenty cold. Unfortunately, when you touch the screen of your smartphone wearing conventional gloves, the smartphone screen does not respond to your touch in any way, whereas if you take off your gloves, your hands will get cold very quickly. In such situations, the best way to solve this problem is to get special gloves for touch screens.

What are “touch screen gloves”?

Externally, special “touch screen gloves” do not differ from conventional knitted models. They are also made of the same materials, which are natural wool or acrylic and similarly they have a great variety of colors and designs. The only difference is that at the fingertips of touch screen gloves (usually – on the index, middle and large fingers) there are some metallic threads woven in the mating. Thanks to these threads conducting electric current, a smartphone display is very sensitive to touch, which means that you can operate your smartphone without having to take off such gloves.

It is exactly these conductive threads that provide an adequate sensor response. The fact is that when your finger touches the display of your smartphone, there is a micropulse of current in the touch point. Actually, it is on this principle that the capacitive screen works. Conventional gloves made of simple materials, act as an insulation and hence block these micropulses. Therefore, there is no screen response and you have to get cold every time you want to send a text or make a call in winter.

There are plenty of advantages of touch screen gloves, and they are as follows:
• The ability to use touch-sensitive devices without having to take off gloves
• Ensuring a high accuracy of screen taps.
• Protection of hands from cold.
• Cool looks.
• The ability to choose gloves for any style of clothing.
• Relatively low price

As for the external characteristics of the touch screen gloves, they can be very different. Nevertheless, many manufacturers produce such touch screen gloves of mainly neutral design suitable both for women and men. Their size is usually quite versatile too.

Where can you Buy Touch Screen Gloves?

In fact, you can buy touch screen at almost any store that sells smartphones. However, the workmanship, and ultimately, and the end result can vary considerably. Therefore it is better to buy gloves at the store with a solid reputation or if you want to buy them online, we suggest you opt for some reputable brands in preference to Chinese ones.

Business Bytes: Common Tech Problems Your Company Might Run Into