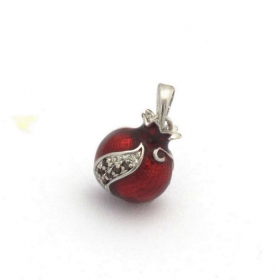 First a look at the pomegranate in familiar literature… Well, before heading out to literature of other cultures I thought it made most sense to start with what I know and that would be Jewish literature and you can’t get more Jewish than the Hebrew Bible.
When the spies were sent by Moses to tour the holy land they came back with enormous fruits on their shoulders, one of which was the pomegranate.
Unsurprisingly then, the pomegranate is one of the seven species that the land of Israel is blessed with according to Deuteronomy 8:8. Furthermore, pomegranates are often associated with the righteous King Solomon- his crown is said to have been in the shape of a pomegranate and the pillars in his palace were also decorated with pomegranates.
According to the Hebrew Bible, pomegranates represent fruitfulness and righteousness.

Moving on to the ancient Greeks…

The pomegranate appears quite a lot in Greek mythology- famously in the story of Persephone- and is recognized there as a symbol of fertility and plenty. In the story of Persephone, the king of the underworld, Hades, takes Persephone to the underworld. Persephone’s mother, Demeter, who is also the goddess of crops becomes furious and stops the growth of crops.
As a result, Zeus orders that Persephone be released. Before releasing her, Hades forces her to eat pomegranate seeds which means that she is doomed to return to the underworld for a portion of time every year. Every time Persephone returns to the underworld the growth of the crops comes to a halt and produce dries out.
As soon as she returns everything starts growing again. Persephone’s eating of the pomegranate comes to represent the changing of the seasons; her descent representing the approach of winter and death and her return representing spring and rebirth. It follows then that pomegranates represent fertility, resurrection and plenty.

In one of Shakespeare’s most famous plays, “Romeo and Juliet,” the pomegranate fruit is referenced. After Romeo and Juliet spend the night together in Juliet’s room, a nightingale perched on a pomegranate tree warns him to get home before sunrise. The pomegranate is understood in this instance to represent a range of concepts from innocence to true love.

I actually found that there was huge variety of literature from different cultures, countries and religions that refer to the pomegranate. Chinese art, the Koran, Oscar Wilde’s writings and Italian paintings all depict pomegranates. On the main, it is viewed as a symbol of fertility and it’s crown-like top also expresses royalty.
I found it amazing to see how wide-spread the pomegranate is in different forms of art. I say go for it, treat yourself to a piece of jewelry displaying a pomegranate and know that you are wearing a symbol rich in symbolism and beautiful to boot!

License: Image author owned
Uriel Sela is one of the partners at Ajudaica.com. This on-online Judaica shopping website presents many beautiful jewelry with pomegranate symbols and many other jewelry presents you can purchase for your loved ones for every occasion on: www.ajudaica.com

Online Shopping In China: The Past and The Present

The Untold History Of Abayas