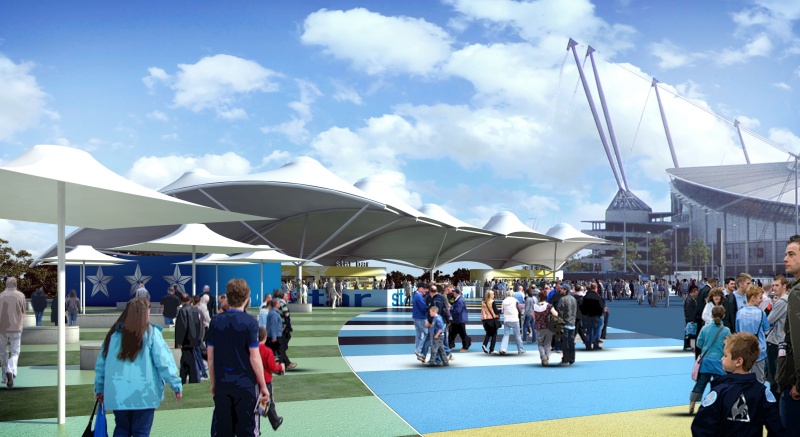 When visiting the United Kingdom, the city of Manchester should be on any tourists list of unique cities to see with a plethora of options for fun for the whole family, couples or friends. Beyond the abundance of great restaurants, night life and historical tours, a Manchester City football match is among the city’s best options to really get a feel for the culture and people the region boasts. If visiting in the fall, a football (soccer, to you Americans) game in the world-famous English Premier League is one of the most unique experiences the country has to offer. Whether a fan of the game or not, the passion on display is unrivaled among sporting events and is an enormous facet of English culture, especially in the bigger cities such as Manchester.

Outside of enjoying a cold brew at one of the many local pubs, the Man City FanZone is one of the best experiences you can have while in town for a Manchester City game. You will join 40,000 plus fans in the city square to soak up the sights and sounds of building anticipation to watch one of the best football teams in the world take the field. Starting hours before the game, Man City FanZone is a hot spot for the passionate football fans the city has boasted for decades. Booking your session at the Man City Fanzone with Musement is one of the best options you have. Working directly with the team for years to create a Man City experiences like none other, Musement boasts some of the best Man City packages available to the public, and at competitive rates.

Beyond just going to a game with a pub stop before (and always after), a visit to the Man City FanZone is a must stop for any tourist looking to get the best all-around experience of a Man City football game. Created to make their fans even more enthused for the big match, Man City FanZone enhancing the anticipation with pre-match entertainment, food, trophies on display for pictures and just an area for their supporters to gather and get in the mood for some amazing British football.

Man City FanZone also features the CityStore, which is the best place in all of Manchester to get some “Blues” gear to rep the squad the day of the match and beyond. While it is shut down for the actual match, which you’ll want to be sure to go to anyway, it reopens post match for big screen interviews, post-match analysis, and more food and entertainment to celebrate the Blues win! It also offers a general area for fans to discuss the game, decide the best way to get home and talk about plans for their evening. Since it is England in the fall there’s always the chance of rain, but fear not. Man City Fanzone has you covered with waterproof canopies that keeps their passionate supporters dry throughout your experience. Whether you’re heading to your first Man City match or a regular, the Man City FanZone is a must stop for any one attending a Man City match.

How To Choose The Correct Netball Uniforms?