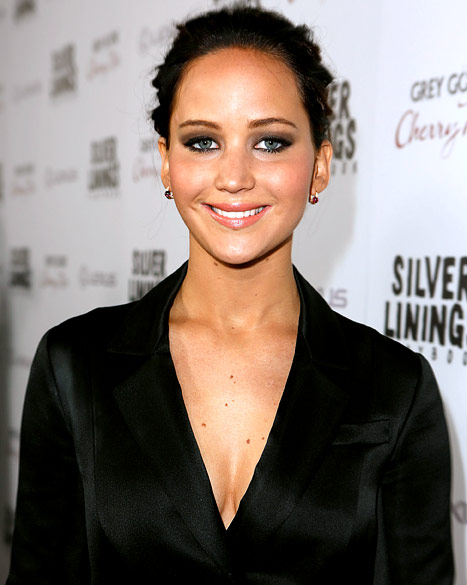 Jennifer Lawrence is a Hollywood actress who is best known for her role in the Silver Linings Playbook. She has been the cover girl of many magazines such as Fabulous. Having been born in Louisville, there was no looking back for Lawrence as far as her film career is concerned. Though still in her 20’s, she got many meatier roles to perform resulting in several nominations as well. During the year 2012, she made news by winning several awards including Academy Award and Golden Globe Award. After attending school in Kentucky, it took no time for Lawrence to focus upon acting. She received enough encouragement in this regard from her father, who owns Lawrence & Associates. Lawrence had her share of ups and downs in life. In fact, she was highly tipped to be a part of Twilight saga as well. She had gone through a screen test as well to fit the role of Bella Swan. However, the role ultimately went to Kristen Stewart.
As an emerging actress, Jennifer Lawrence started accepting major roles in movies that immediately catapulted her to instant fame. The Burning Plain is one of the movies that she acted opposite with the likes of Charlize Theron and Kim Bassinger, which won her several accolades. Winter’s Bone is the film that got her the major breakthrough because of which she received international fame. Lawrence is highly appreciated for her looks and personality even by her critics. Choosing ambitious roles at a young age has been the secret to her phenomenal success in the movie industry. She even portrayed several challenging roles at a young age in order to prove her acting histrionics. For instance, she perfectly fits into the role of Ree Dolly in Ozrak Mountains who bears the responsibility to take care of her mentally challenged mother being still a teenager.
Famous film critic David Denby went on to add in The New Yorker that if anyone else would have played the role, then it could have been a severe injustice for sure. There have been several critical acclaims such this because of the way in which enacts each and every role. It is difficult to complement good looks with perfect acting skills. However, it is just sheer talent of Jennifer Lawrence that made him carry everything with ample ease. Also, she is known for commitment regarding movies and career. This is why she takes a lot of time thinking about her role before accepting.
In the 2011 hit movie The Hunger Games, she represented a role that wanted her to go through stringent schedules consisting of yoga and stunts. Perhaps, she gets into the thick of any role with maximum ease because of the dedication she has got. This positive trait of hers made her to have fans across the world. There is nothing sarcastic is one has to admit about her status as teenage icon. Lawrence would like to be remembered as one of those accomplished actresses who has been in the field for a long time tasting a successful career in Hollywood.

Author Bio:
Maria is an experienced content writer and publisher for Business Development. She recently reviewed and wrote about Mitch Berman Zillion Tv.

Online Gaming Is The Future

How To Find Inspiration For Story Writing