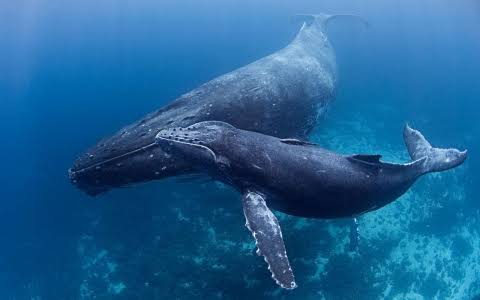 Humpback whales are some of the most easily recognised and iconic whales in the world. Obviously, they are known for their distinctive body types, but also they are known for breaching and slapping the water. For being such incredibly large animals, humpback whales are incredibly acrobatic. Their splashy manoeuvres are firm favourites with whale watchers around the world. Australasia is the best part of the world for seeing this type of thing. However, they are not the only whales off the coast of Australia. Though rare, blue whales have been known to appear in the waters around Sydney.

Humpback whales are one of the largest species of whale in the entire world. They typically weigh about 36,000 kilograms or 79,000 lbs. For comparison, a BMW 325i weighs about 1400 kilograms. So, the average humpback whale weighs more than 20 cars. They are 12-16 metres (39-52 feet) in length as well. That means not only do they weigh more than 20 cars, but they are also three to five times as long as a car. That just serves to make their leaping acrobatics all the more impressive. However, as was stated, the humpback whale is only one of the largest species.

The blue whale is the largest species of whale in the world. In fact, the blue whale is the largest animal in the world and also the heaviest animal known to have ever existed. It is heavier even than the dinosaurs were. Blue whales can weigh as much as 180 tonnes (180,000 kilograms). That means they are five times as heavy as humpback whales. Also, they can be as much as 30 metres (99 feet) long. That’s almost twice as long as the longest humpback whale.

Whale watching tours in Sydney tend to focus on spotting humpback whales. Humpbacks are very common in the waters of Australasia, especially during the winter breeding season. They are also fairly easy to spot when they breach and slap the water. Blue whales are not quite as common off the coast of Sydney though they are in the South Pacific. They tend to prefer the waters off the coast of Western Australia. However, when certain conditions are right, they do travel to the other sides of the continent. These situations usually involve the water temperature and krill populations.

Humpback whales and blue whales do not have many predators. In certain locations, they are somewhat vulnerable to orcas, but typically their biggest predator is humans. In recent years, legislation around the world, as well as the efforts of conservation groups, have served to reduce the amount of whaling around the world. The populations of whales are higher than they have been in recent years, and the money you spend on ethical whale watching actually aids in those efforts.

The humpback whale is an incredibly iconic whale that, despite its large size, is incredibly acrobatic in and out of the water. The blue whale is the heaviest animal that has ever existed. Together, these two types of whales are incredibly popular for tourists to catch a glimpse of.

The Duties Of Make-Up Artists In Parramatta