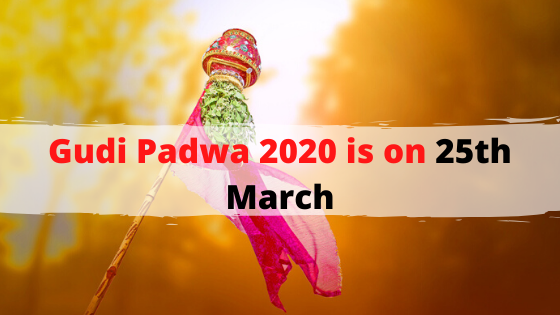 What is Gudi Padwa

On the first day of the month of Chaitra, the state of Maharashtra and Konkan region of India celebrates New Year (as per the lunisolar Hindu calendar), which is called Gudi Padwa. The Konkan region refers to this day as Samsara Padavo. Gudi Padwa is an auspicious day and  the Hindu Maharashtrians and Konkanis follow the set of rituals as per tradition, with joyous enthusiasm on this day of new beginnings. Some other significance of Gudi Padwa is that it is also to herald the Spring or Vasant season and to welcome the harvest of the Rabi crops. Gudi Padwa falls on the first day of New Moon and the Chaitra Navaratri also begins on this blessed day.

On Gudi Padwa all Hindu Maharashtrian families have the Gudi which can be called a flag raised outside their house. The Gudi holds the most important significance of Gudi Padwa. 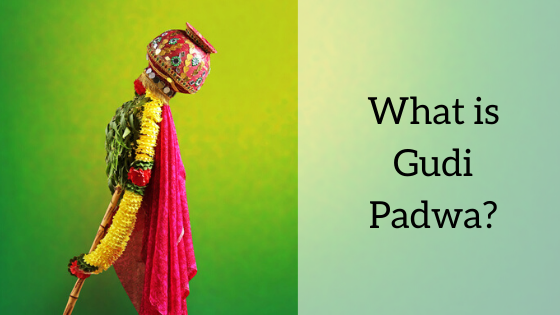 The Gudi is also known as the ‘Brahmadhvaj’ which translated, means the flag of Lord Brahma which has a connection with the story from the Brahma Puran. The story narrates that on this particular day Lord Brahma re-created the Universe which had been completely engulfed by an enormous flood.  The Lord also re-established time, which had stopped with the destruction. So the Gudi is raised to honour this event.

Another most popular significance of Gudi Padwa is that, Lord Ram had returned to Ayodhya on this day after His victory over Ravana and after the 14 years of exile. Just like the kingdom of Ayodhya celebrated Lord Ram’s return, the festival of Gudi Padwa is celebrated and people seek blessings of Lord Vishnu too on this day.

The hoisting of the Gudi is said to have been initiated by Chattrapati Shivaji Maharaj as a sign of victory, after he along with his army expelled the Mughal dominance from the kingdom.

So effectively, the Gudi is a sign of victory with other meaning of every elements that go into assembling the Gudi.

How to celebrate Gudi Padwa with all Hindu Rituals

The Gudi Padwa rituals start with a pre-sunrise bath by first rubbing oil on the body. The rubbing of oil and then having bath has its significance. When the Sun rises, people bow down to the Sun and absorb its healing and high vibration energies.

After cleaning of the house and puja alter etc., women of the house put Rangoli, on the floor, outside the entrance of the house and on the steps leading to the house to welcome the Gods and Goddesses into their house. The tradition of Rangoli is an integral and must part of Gudi Padwa rituals. Rangoli is put with either indigenous ingredients of Rice powder, Turmeric powder and Kumkum (Vermillion) or with coloured powders of different hues available locally. Also many use flower petals of different colours in the Rangoli. The area where the Gudi is raised is also decorated with Rangoli on the floor.

All family members wear new clothes on this day and women usually wear Gold  jewellery as a sign of prosperity.

In the morning a unique mixture of Neem leaves paste, Tamarind pulp and Jaggery is eaten which strengthens the immune system, purifies blood as well as it somewhere represents the bitter, sweet, sour taste of life.

It is said that the Gudi should be raised during the early hours of the morning. The Gudi is made by the family members. The way to make the Gudi is:

2) On top of the tied cloth, small branches of Neem leaves and Mango twigs are tied.

3) Put a Marigold flower garland and a garland of  ‘Sakar Gathi’, which is a traditional sugar crystal sweet

4) Capping all this an over turned Silver or Copper pot.

After making the Gudi,  the sacred Swastik symbol is drawn with Kumkum and normally the head of the family installs the Gudi on the right side of the main entrance. The Gudi is raised high so that it is seen by everyone from near and far. The Gudi is supposed to dispel the negative energies even that of evil eye and help to attract prosperity, good luck, good health to the house and its inmates.

Puja and aarti of the Gudi is done, with offerings of food and sweets, like Shrikhand, which is a speciality of Gudi Padwa. Everyone prays and seeks blessings from God for a fruitful year ahead.

Aarti and worshipping the deities at the puja alter of the house and invoking Lord Vishnu and Lord Brahma are part of the rituals. Some families perform Havan or Homa too. Bhog of all the dishes which are supposed to be had on Gudi Padwa are offered to God. Later this is had as ‘prasad’. Many families visit temples to garner the blessings of the Divine.

On this day gatherings of friends and families are organized, to eat together/exchange greetings and gifts and just enjoy the beautiful day with loved ones. The must inclusion in the menu of the day is Shrikhand-Poori and Pooran Poli which form a part of the tradition and are lovingly made by the women of the family.

In cities and towns of Maharashtra, like Mumbai and Pune, Rangoli competitions are organised, processions are seen on the roads with men and women clothed in traditional attires, holding flags and dancing with traditional Maharashtrian musical instruments being played efficiently is a common sight.

This vibrant day is celebrated with zeal by the people of Maharashtra and other states that celebrate their new year on the same day as Gudi Padwa.

Genuine Focus of Photography is on Holding Picture Moments and Emotions