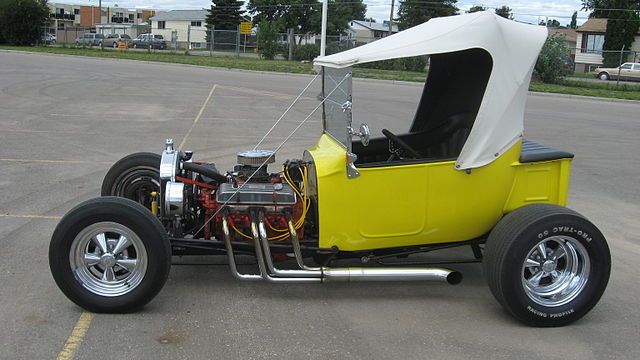 The term “Hot Rod” has been transformed into a catch-all phrase to include customs, modded cars, and race cars since it was coined in the last hundred years. The 20th century may represent the pinnacle of this movement as many body styles were the perfect casing for housing some pretty powerful engines underneath. It’s nearly impossible to include every great hot rod in any “Best List,” but the following either represent the best cars to build from or are some of the best examples of a hot rod in the 20th century. Regardless of which list a car falls into, you can expect beautiful styling, incredible power, and an ability to turn heads on the road and at the shows.

Why not start with one of the best selling cars of all time? All due respect to the 1908 Tin Lizzie, but by the late 20s, the Model T had grown into a tougher look on the outside. It was just waiting to be given a boost underneath the hood by hot rod enthusiasts later in the 20th century — at least if there was a hood. Due to the car’s popularity, many old Model Ts have ended up as hot rods. There are also many places where you can purchase a rebuild to get your project off the ground.

Widely considered the crown jewel for hot rod enthusiast looking for a car from the early part of the 20th century, the 32 Roadster is every bit deserving of its adoration. The Roadster is fairly small and a little on the lighter side. With even a half decent engine, this car will be surprisingly fast coming for such a small package. While they can certainly perform well on the track, nowadays the Roadster is more for those who want to be noticed on the highway. With that said, cruising with the top down is definitely the way to go, as often as the weather allows it. If you are looking for the one of least costly ways to get a hot rod in your garage, the 33 Ford Coupe may be the answer. Available as a kit, all you have to do is find the engine/gearbox you want, add some tires, and pick the perfect paint job and you have one of the most popular hot rods on the road today. Of course, you can still find originals but expect the price tag to be higher. While it may not reach the speeds of other supercars mentioned, the CadZZilla is just too cool looking not be included with the best hot rods of the 20th century. It is the brainchild of hot rodder Boyd Cunningham for Billy Gibbons of ZZ Top, hence the two Zs in the name. Unfortunately, there is only one out there, and Mr. Gibbons doesn’t look to be parting with it anytime soon. If your last name is Ford, you stand a pretty good chance of having a one of a kind car in your garage. Edsel Ford can thank his father Henry for starting the company that allowed this cool looking ride to be commissioned. It took a year to design and complete, but when it was done, chief designer E.T Gregorie had built a fighter-jet-inspired muscle car that still the envy of hot rodders today.

Thanks to a movie some thirty years later, the ’67 Shelby from the 20th century became an even bigger star overnight. Known as Eleanor in the remake of Gone in Sixty Seconds, this car managed to upstage Nicolas Cage (not exactly a difficult task nowadays) to become the number 1 car on every boy’s wish list. The 67 was one of the few years that the Mustang variant was modified exclusively at Carroll Shelby’s own sites. With a powerful engine, capable of speeds in excess of 150mph, this American muscle from the 60s can still hold it’s own against the fast cars of the 21st century.

With these options in mind, a little extra research, and the help of custom and classic car specialists like Linear Automotive to help you shop your parts and build your custom hot rod, get ready to turn some serious heads.

Brian Levesque is a freelance writer and automotive enthusiast, contributing articles on cars and car repair, as well as topics pertaining to the small business community.