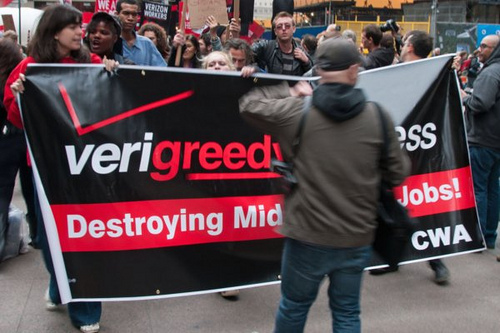 Facebook had a very profitable year in 2012. For the first time, the company broke the one billion dollar profit barrier. How much income tax did the popular social media website have to pay?
The company didn’t have to pay a single penny. In fact, Facebook received a tax refund of nearly four and a half million dollars.
Analysts speculate that Facebook was able to save $3.2 billion through a tax loophole that allowed it to receive major tax deductions on employee stock options.
Facebook was hardly alone in this endeavor. According to a report published by the nonprofit Citizens for Tax Justice, 26 major American companies paid no federal taxes in 2012 despite raking in billions of dollars in profits.
The United States taxes corporations at 35 percent of their net profits, which is one of the highest corporate tax rates in the world. In reality, however, the average corporate tax rate in the U.S. is 18.5 percent. Large corporations are able to leverage their power and connections to lobby for special tax breaks, which are then inserted into the tax codes.
Here’s a look at three insanely huge companies that paid no federal taxes in 2012.
1. General Electric. 2012 profits: $19.6 billion. Effective tax rate: – 18.9 percent.
General Electric’s formula for reducing its tax burden involves accounting methods that enable the corporation to consolidate its profits outside the United States. General Electric operates a huge leasing and lending business outside of the United States that can’t be taxed under current American law so long as that money remains abroad.
General Electric also lobbies aggressively in Washington D.C. for domestic tax breaks. The corporation’s tax department includes former U.S. Treasury and Internal Revenue Service officials, as well as one-time Congress members who served on tax-writing committees while in office.
2. Verizon Communications. 2012 profits: 19.8 billion. Effective tax rate: – 3.8 percent.
Between 2008 and 2010, Verizon Communications received $951 million in tax subsidies from the federal government, putting its effective tax rate at – 2.9 percent. In 2011, the corporation’s effective tax rate was an even lower – 3.8 percent. One specific loophole that Verizon deploys is called the Reverse Morris Trust, which allows corporations to transfer funds tax-free following statutory mergers with businesses they acquire.
In addition to federal tax breaks, Verizon also receives tax subsidies at the state and local level. These are granted ostensibly as incentives so that Verizon will hire more local workers and invest in communities where these workers live. In fact, however, over the past three years, Verizon has cut its employment force by over 40,000 jobs.
3. Boeing. 2012 profits: 14.8 billion. Effective tax rate: – 5.5 percent.
Boeing receives billions of dollars in American taxpayers’ money every year for contract work. Over the past nine years, Boeing has earned over $54 billion in government contracts. Boeing’s senior management includes former high-ranking government officials from both parties, from the Cabinet level down.
The company manages to avoid paying federal taxes itself, however, through a sophisticated combination of foreign subsidiaries and research and development spending subsidies.
Boeing demands and receives state and local aid for human resource costs that include hiring and training new employees and wage rebates for existing employees. It also receives government money for financing its own new facilities and building necessary infrastructure such as sewers and roads.

image source
Kimberly Evans is a regional corporate manager for a clothing company who enjoys writing articles about big businesses and career tips for those climbing the corporate ladder. Kimberly also enjoys sharing educational advice, such as in her latest article about online programs.