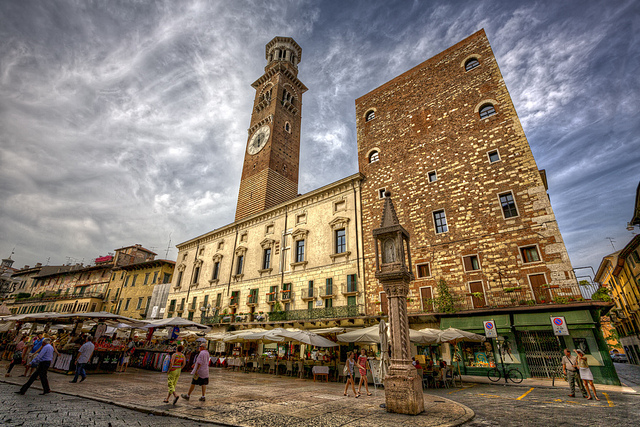 Verona is a truly magnificent place, which has a right to be called “the world’s most romantic city”. Every year millions of couples in love are longing to come to this tiny romantic town, because it is exactly the place, where according to Shakespeare, the story of Romeo and Juliet took place.

Verona is perfectly suitable for a honeymoon or a romantic trip, and simply for everyone who aims to enjoy the beauty and tranquility of the city. Like most of the other Italian cities, Verona can offer its guests a big number of interesting sights to explore – ancient temples and churches, museums, graceful gardens, mansions and bridges. Now we suggest you to stroll around Verona streets and enjoy the romantic atmosphere of this charming town.

The square is located at the territory where the Roman era forum used to be. For many centuries the city’s political and economic life was focused there. 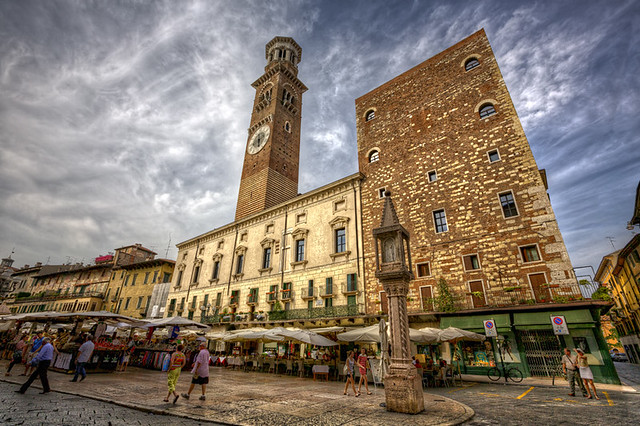 Even if the square by accident appears on the map of your route, stop for a moment there and look around. You will be pleasantly amazed when you find yourself in the surroundings of the Renaissance palaces, gorgeous fountains and modern cafes, which allure the passers-by with the incredible flavor of the fresh-baked pizza.

Since Piazza delle Erbe liesin the city center, you can easily get to all the main Verona attractions from there.

Although Piazza delle Erbe and Piazza dei Signori are located next to each other, they differ a lot by character and design. If the first square can be described as noisy, lively, cheerful, always full of tourists and merchants, then the second one is more solemn, but more quiet at the same time.

Currently the main attractions of the medieval Verona are concentrated on the Signori square. In some travel guides the square is referred to as Piazza Dante, who found shelter in Verona after being exiled from Florence. A monument in the honor of Dante is located in the middle of Signori square.

This tower offers stunning views of Verona. You can climb to the top of it either by foot or to use an elevator, which costs around 1 Euro.

This medieval tower was constructed in the XII century, though later it undergone several reconstructions and now it reaches the height of over 80 meters!

Lamberti Tower was named after the family that sponsored its construction and is located very close to Piazza delle Erbe.

Perhaps, this is the most romantic attraction of the town. According to the legend, a beautiful Juliet used to live there.

The building was constructed in the XIII century and really belonged to Del Cappello clan, who became the prototype of the Capulets in the play. In the XVII century the house was sold to the Rizzardi family, who transformed it into the hotel. 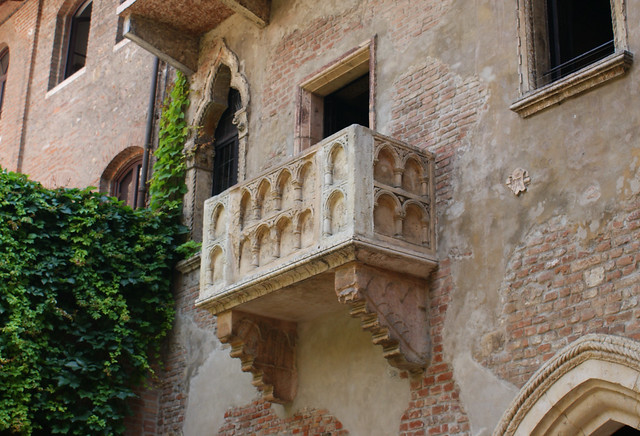 After the complete restoration in the XX century the building has become one of the most wonderful ones in Verona. Many screen versions of the great love story were filmed on the territory of the house. Recently, Juliet’s House has also been used as the wedding venue.

By the way, it is believed that a couple of lovers, who kisses under the Juliet’s balcony, will always be happy together.

In Italy this arena occupies the third place in the list of the preserved amphitheaters constructed by the Romans. This huge amphitheater dating back to first century AD is a prototype of the Roman Coliseum.

It was designed for more than 30 thousand spectators; the seats are made in the form of 44 tiers of marble stairs.

The amphitheater is renowned for opera performances held in it. It can accommodate up to 15 thousand spectators and is considered the largest open air opera house in the world. In addition to opera performances Arena is often used as a concert hall and the venue of various trade fairs.

San Fermo Maggiore is an admirable church which seems to be the combination of two completely different constructions. Simple arcades of the lower church, constructed by the Benedictines in 1065 are decorated with exquisite frescoes.

The upper church was built over the lower church in the XIII century. This temple is called a treasury of the Verona art. Many famous artists of the era left their masterpieces there. The relics of the holy martyrs named Fermo and Rustico rest in the main altar of the upper church.

The Giusti Palace and Garden

The ancient palace and park complex lie on a hillside near the eastern outskirts of Verona. In this place you will experience a complete tranquility that will distract you for a while from dusty Italian streets and frantic pace of life. 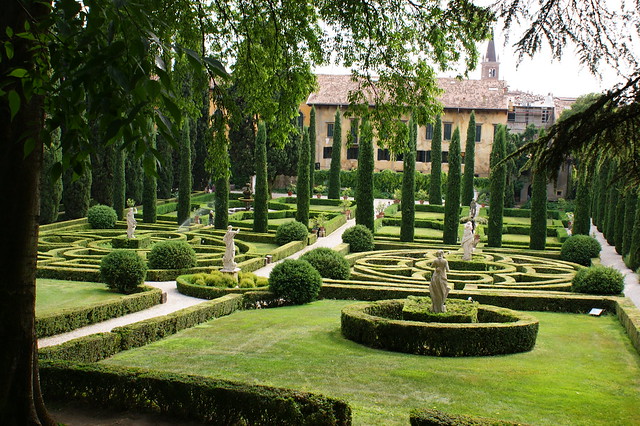 The park complex is decorated with numerous statues and fountains, made in accordance with the canons of the time. It welcomes the visitors at the front gate with elegant obelisks, and a wonderful alley of tall trees extending from it will lead you to the ancient grotto.

In the western part of the park you can see plenty of the paved paths, various flowers and old citrus trees that stretch right near the walls of the Giusti Palace.

For some reason, most Italian travel guides don’t include this garden in the list of attractions recommended for visiting, so nobody will disturb you when you’ll be enjoying the solitude there.

In fact, one day would be definitely not enough to check out all Verona attractions. However, with a rental car service you can manage to explore many sights even if you are short for time. Having made advance reservation at http://italy.rentalcars24h.com/verona-airport you can start exploring the city immediately upon arrival there.

We wish that Verona captivates you with its medieval and Renaissance splendor and shares its secrets with you.

Author Bio: Lily Berns is a travel writer and she likes to share with interesting info of different places through her publications. Lily recommends using RentalCars24h in Italy, which helps to compare all major car rental companies in the whole world to give you the best car rental deal.